Phil White Oct 20, 2021 Phil White
Team sports like football, basketball, soccer, and rugby are hugely popular the world over, on both college and professional levels, and such popularity means that they are big business. Very big. Broadcasting rights alone bring in billions: ESPN paid $5.6 billion to broadcast college football playoffs for twelve years; Turner Sports/CBS shelled out $10.4 billion to show the national college basketball tournament through 2024; and the most recent NBA TV deal came in at a cool $26.4 billion. As the rewards for winning have increased, it’s no surprise that sports team budgets have followed suit. Sure, the athletic program at the University of Texas brought in $161 million last year, but the Longhorns also spent $154 million over the same period. Fifteen other college athletics program also racked up over $100 million in annual expenses. But that’s child’s play compared to the outgoings at the world’s most valuable soccer team, Manchester United, which spent more than $500 million in 2015.  The trouble is that all this spending often fails to yield better results. Teams in all sports have tried just about every gimmick to “hack” their way to better performance. But as they’ve gotten stuck in stats, mired in backroom politics, and diverted by the facilities arms race, many have lost sight of what should’ve been their primary focus all along: the game itself.  In Game Changer, Fergus Connolly shows how to improve performance with evidence-based analysis and athlete-focused training. Through his unprecedented experiences with teams in professional football, basketball, rugby, soccer, Aussie Rules, and Gaelic football, as well as with elite military units, Connolly has discovered how to break down the common elements in all sports to their basic components so that each moment of any game can be better analyzed, whether you’re a player or a coach. The lessons of game day then can be used to create valuable learning experiences in training, evaluate the quality of your team’s performance, and home in on what’s working and what isn’t.  Game Changer also shows you how to expand training focus from players' physical qualities to also advance athletes technically, tactically, and psychologically. His TTPP Model not only helps players continually progress but also stops treating them like a disposable commodity and instead prioritizes athlete health. Bringing together the latest evidence-based practices and lessons from business, psychology, biology, and many other fields, Game Changer is the first book of its kind that helps coaches, athletes, and casual fans:    • Create a cohesive game plan that improves performance through defined objectives, strategies, and tactics • Put statistical analysis and technology into context so teams can bypass the hype and get meaningful results • Identify dominant qualities to maximize during training and limiting factors to improve • Create realistic, immersive learning experiences for individual players and the entire team that deliver defined outcomes  • Structure player development with a new, holistic model that puts athlete health first and helps reduce the chance of injury and burnout • Balance training load so that all players are fresh and ready to play at their best in competition • Rethink coaching and organizational leadership and enhance communication, group dynamics, and player interaction • Create a winning team culture 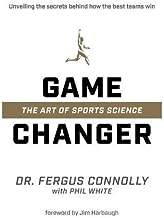