Peter Connolly Oct 20, 2021 Peter Connolly
With the ingenuity of a detective, Peter Connolly has brilliantly reconstructed the life of a Roman soldier--who lived less than a hundred years after the death of Christ--by using a vast array of archaeological material, including tombstones and original Roman documents written on papyrus found in the sands of Egypt and Syria. The soldier's name was Tiberius Claudius Maximus and he served under the emperor Trajan, in his great wars in Central Europe and the Middle East. Maximus was decorated three times for bravery and became famous for hunting down Rome's great enemy, Decebalus (leader of the Dacians, whose lands covered all of what is now Romania). These two volumes trace the soldier's career from the day he entered the Seventh Legion on the Danube frontier in Central Europe, in about 85 AD, to the day he retired as a cavalry officer in Mesopotamia some thirty years later. They provide a unique portrait of the life of an ordinary man who lived during one of the most extraordinary periods of Western history. In addition to the text, a huge amount of information is conveyed in the richly detailed illustrations that have become the trademark of Peter Connolly's work. 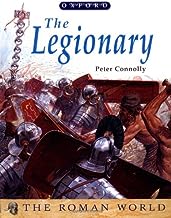